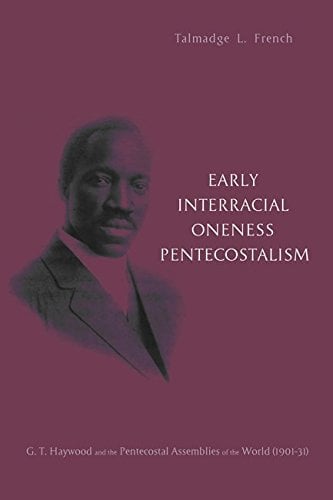 Early Interracial Oneness Pentecostalism is a look at what is perhaps the least-known chapter in the history of American Pentecostalism. The study of the first thirty years of Oneness Pentecostalism (1901-31) is especially relevant due to its unparalleled interracial commitment to an all-flesh, all-people, counter-cultural Pentecost. This in-depth study details the lives of its earliest primary architects, including G. T. Haywood, R. C. Lawson, J. J. Frazee, and E. W. Doak, and the emergence of Oneness Pentecostalism and its flagship organization, Pentecostal Assemblies of the World. This is a one-of-a-kind history of Pentecostalism, through the lens of the Jesus' Name movement and the interracial struggles of the period, interlinking the significance of Charles Parham, William Seymour and the Azusa Street revival, COGIC, the newly formed Assemblies of God, and dozens of the earliest Oneness organizational bodies. Exploration of the significance of the role of African American Indianapolis leader G. T. Haywood is central, as are the development of the movement's key centers in the United States and the ultimate loss of interracial unity after more than thirty years. These crucial events marked, indelibly, the U.S. the global missionary, and the autochthonous expansion of Oneness Pentecostalism worldwide.